I have quite the sweet tooth and although dark chocolate normally does the trick, I’ve been craving another type of sweet.  You know the kind that will manifest itself at your dentist visit?  The one that’s so decadently evil that you hide when devouring?  The one that elicits alien-like guttural sounds of pleasure?   Yup, that’s the one…and that is what these Cinnamon Rolls will do to you.  So good but sooooo sinful…I keep saying that I’m going give some away but it just hasn’t happened yet!

One of the other reasons I wanted to make these is that I’ve been reminiscing about Atlanta and missing a certain store in the Cumberland Mall food court.  Cinnabon…sigh! Hearing that name alone gets my salivary glands in a tizzy.  My friend, Fe, and I would burn calories marathon shopping only to order a Caramel Pecanbon at the end of our trip.  And then, we’d tell each other that we hadn’t really been bad because we ordered one and split it!  Not that it mattered because one of those babies  sets you back a thousand calories but who’s counting?  Sometimes we just shouldn’t know how many calories are in our favourite foods!  As a warning, I don’t know how many calories are in the cinnamon rolls in this recipe so if you are the calorie-counting type, keep it moving.  For the rest of you, as with everything in life, MODERATION is the key.  Trust me when I say IT WILL BE HARD TO MODERATE these sinfully delicious rolls but so worth it. That plus the adulation you will no doubt receive from your family and friends is doubly worth it.  This is the type of food item that I call “bribe food” because if you want to get your way with someone, they’ll be hard-pressed to say no to you after eating these! I’ve veganized the recipe by using soy milk instead of whole milk and margarine for the butter. I’ve also used coconut oil with great success!

So, let’s get to the recipe shall we… 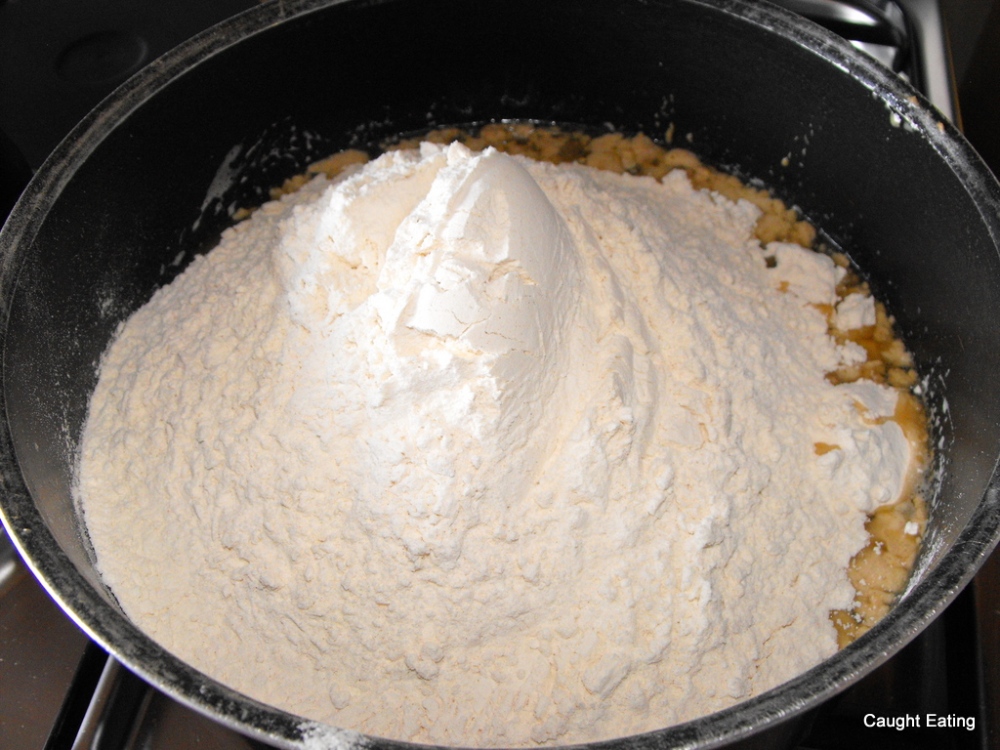 After your milk, sugar and oil mixture come to the point just before boiling, turn off and leave for about an hour then add your yeast, wait about a couple minutes and add your 8 cups of flour and mix together. Cover and let sit for about an hour or so. 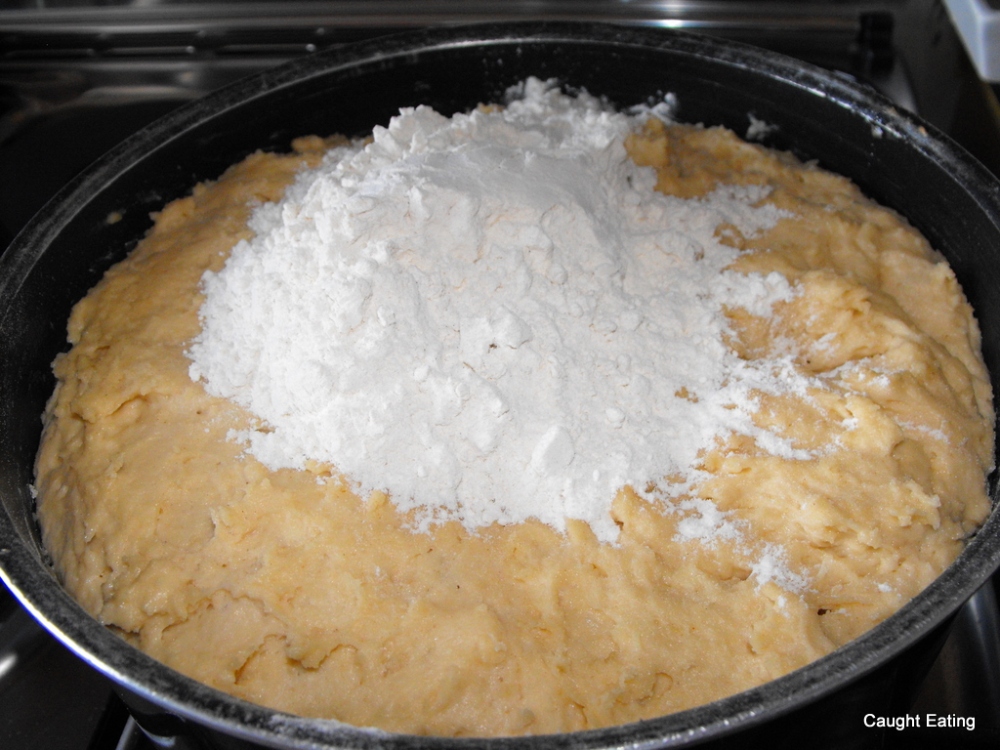 See how the dough has risen after an hour?  Add 1 cup of flour, baking powder, baking soda and salt and mix together to form a dough. 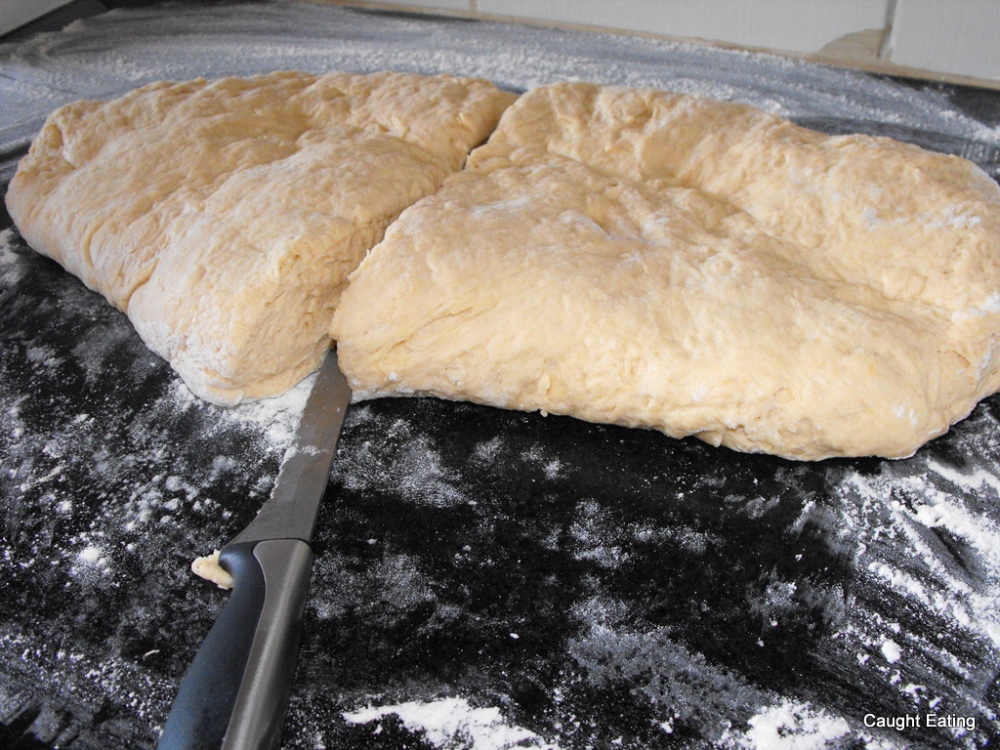 Makes a lot of dough.  Divide your dough in half so that it is manageable to work with. I only prepared half of the dough and froze the other half for use another day. 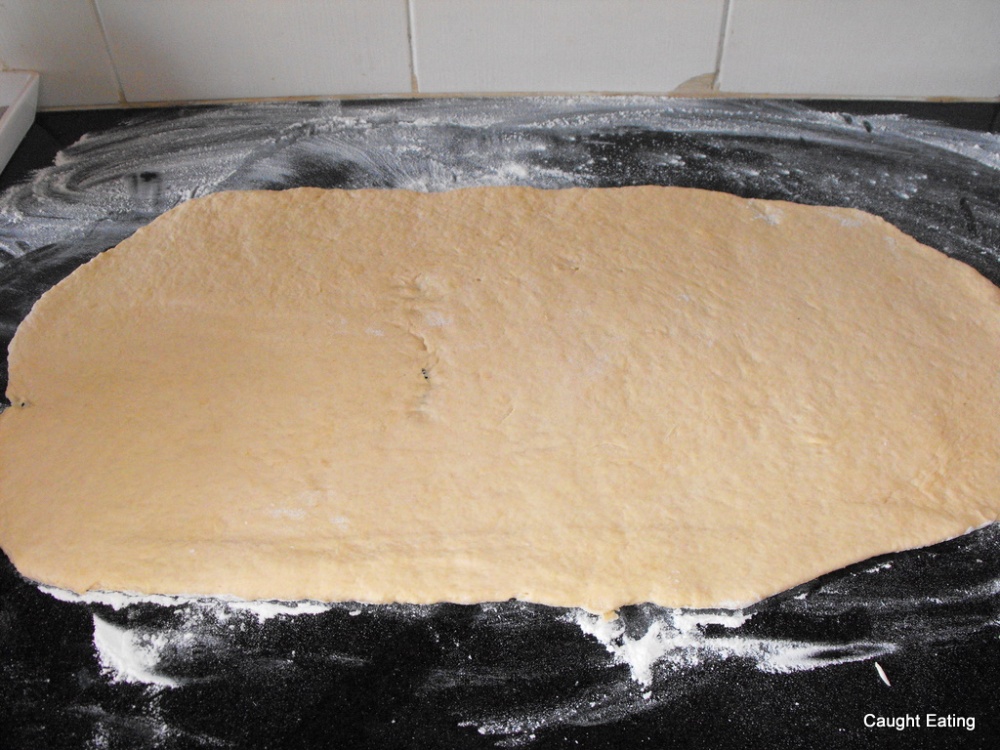 Roll out your dough to a rectangular shape…I’m going to have to work on my shapes but you get the drift.  I probably should have rolled it out a little thinner as well.  If your dough tears, like mine did in the middle, just pinch it together and pass your rolling pin over and it will be fixed! 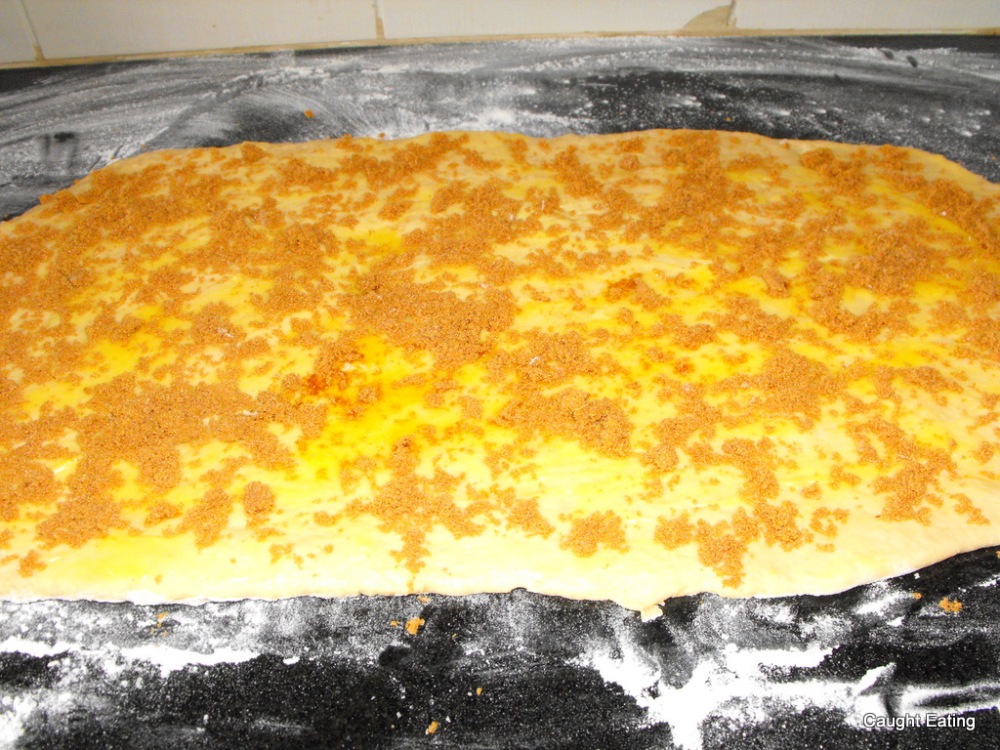 Pour your melted butter/marg/coconut oil, sprinkle your sugar and cinnamon – these are all subjective quantities.  Use as much or as little as you want of each ingredient. I mixed my cinnamon with the brown sugar before sprinkling. No particular reason. 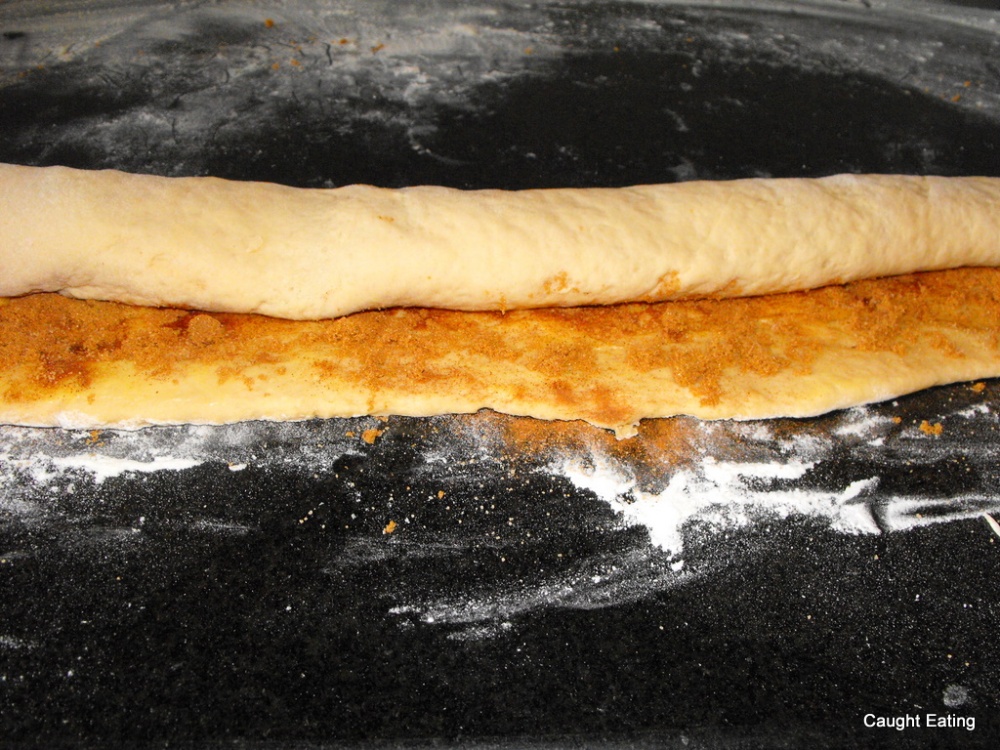 Roll the dough toward you and keep the dough roll tight.  I had a problem doing that but I attribute that to not rolling out my dough thin enough.  When you get to the end pull the dough from the bottom and up toward the middle of the roll and pinch the ends to seal. 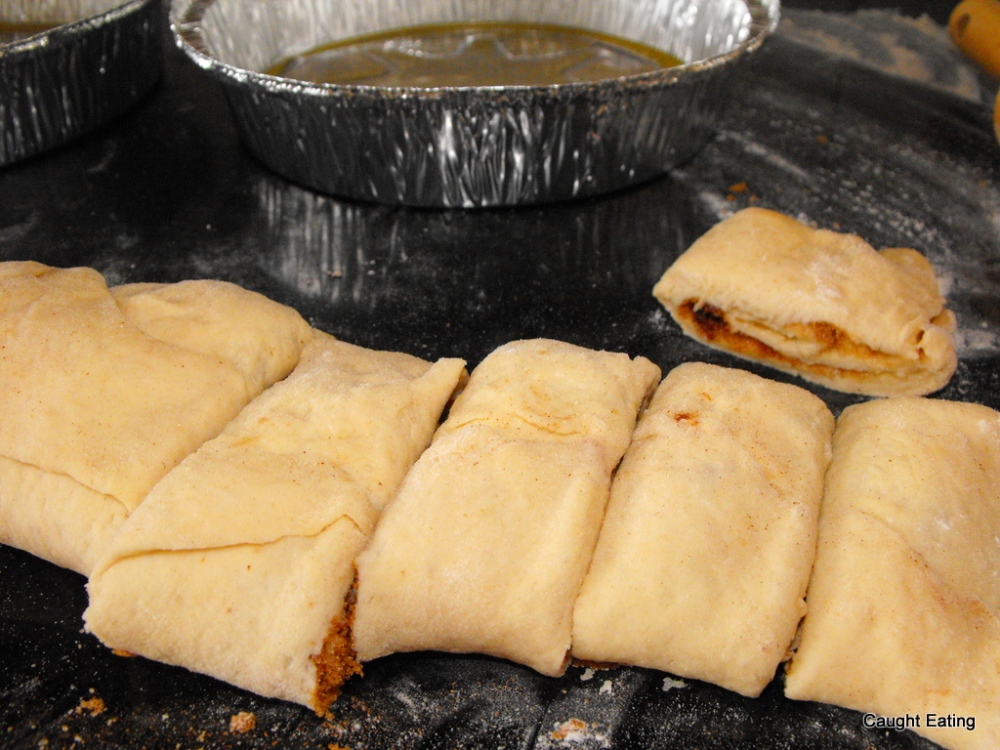 Using a sharp serrated knife, cut your dough into 3/4 to 1 inch thick and lay on buttered dish/foil pans.  My rolls look bigger than they should because I used a sawing motion to cut the rolls – which is wrong because it causes you to inadvertently bear down on the dough, squashing it to a loaf shape instead of roll shape.  Learn from my mistakes.  The best way to cut the rolls is with one swift motion downward or to use a piece of dental floss. Slide the dental floss under the roll, lift up and criss-cross the ends then pull outward. 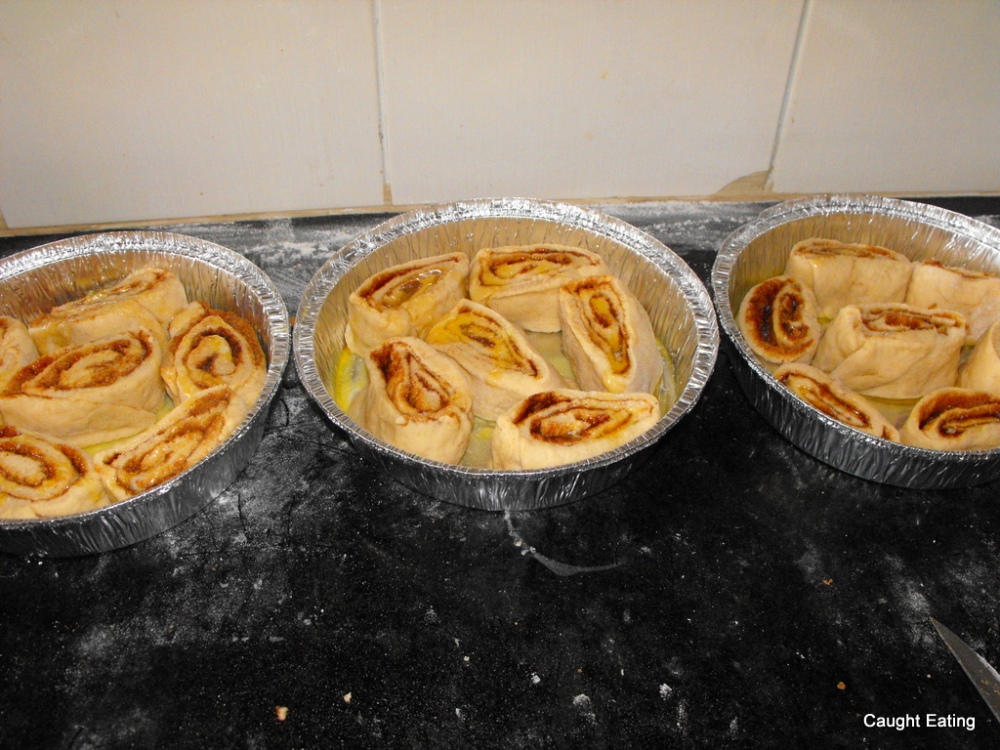 Let the rolls rise for about 30 minutes and then pop into a 400F oven for about 15-18 minutes.  As most ovens vary in calibration, yours may not bake exactly as the recipe.  Mine baked for 21 minutes. 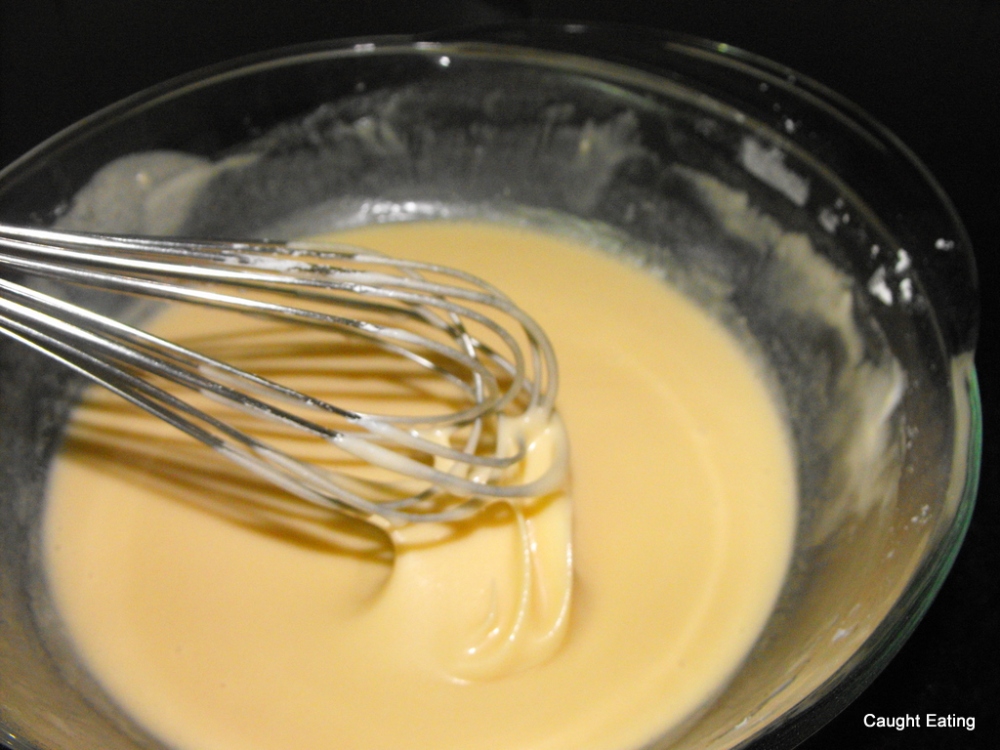 While rolls are baking, make your frosting. I didn’t use all the powdered sugar called for in the recipe so my frosting is thinner in consistency than the original recipe.  I haven’t seen maple flavouring in Nairobi, so I sub’d it with vanilla extract and I also used espresso instead of regular coffee because I love the coffee taste it imparts. 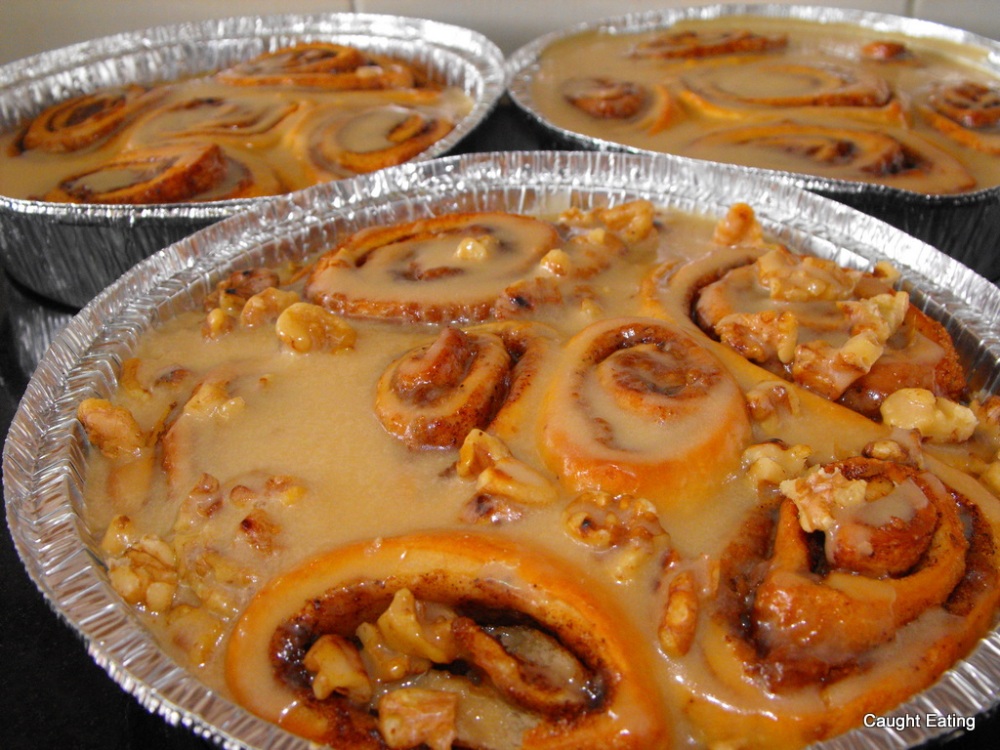 Pour your frosting over the rolls when you pull them out of the oven.  I had also toasted some walnuts (after realising that I didn’t have any Pecans in the pantry) and added them to one of my pans along with the frosting. 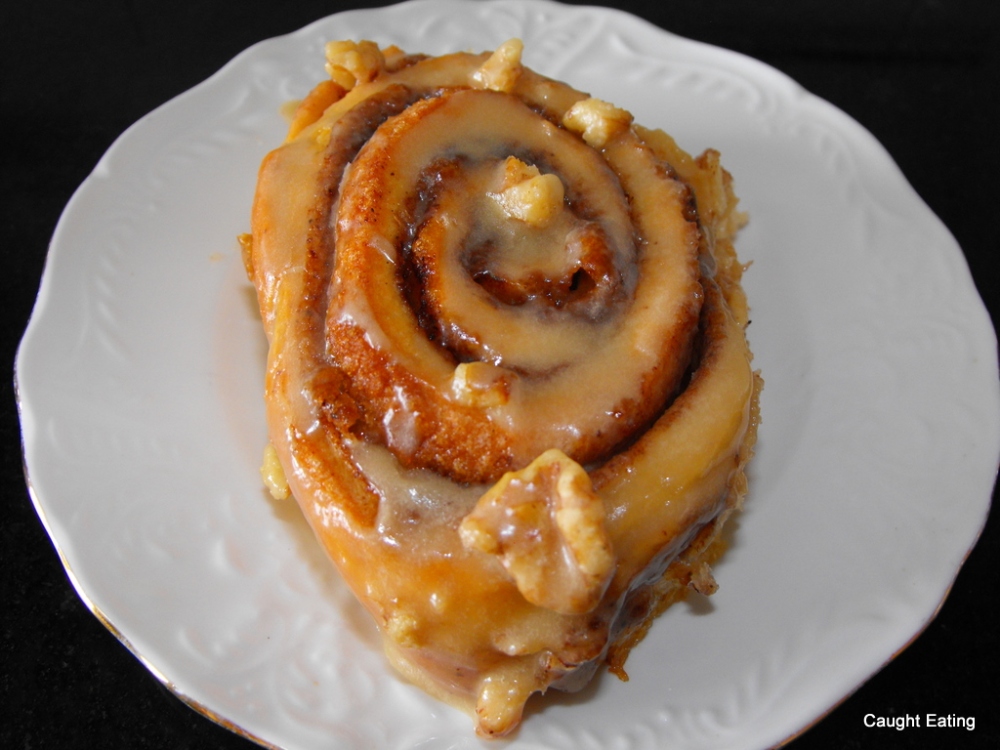 How yummy does that look?  The Mr loves the rolls but he asked me to leave a pan unfrosted for him the next time I make these.  Unfrosted? Ok, where’s the fun in that?  I’ve tried to convert him for years but he doesn’t have a sweet tooth.  He also has a HIGH metabolism (which I would kill for) so I often force him to share desserts with me so that I feel better about consuming a gazillion calories.  He does it because a) I cook his meals and b) you don’t wanna mess with the person who cooks your meals. Such a good sport…

Go ahead and make these then give yourself permission to lick your fingers with reckless abandon!

A couple of notes:

Recipe for:  Cinnamon Rolls (Courtesy of  The Pioneer Woman)

Servings: 6-7 foil pans aka enough for a party plus leftovers!

I live to eat

The Authority on All Things Cruelty-Free and Fabulous

A travel blog about my adventures (mostly) camping in Kenya.

A Wayfaring Wanderer's Nomadic Journey Around The World

Omenana is a tri-monthly magazine that is open to submission from speculative fiction writers from across Africa and the African Diaspora.

Vegan & Vegetarian recipes from around the world

Everything Is a Story

live your best self with real foods

The latest news on WordPress.com and the WordPress community.